A couple issues. When I initially an application, I first built it in English and later on added French, English was the default culture. My client much later informed me that French was the primary language and should start there. So I changed the default language to French. However, when starting the application, it still starts in English. I tried reversing the languages in the Cultures list, but that didn't change it either. Is there something I need to do to force the language to start with the one I want it to?

The second issue I have is the languages listed in the Drop down. Is there a way to change the descriptions of the languages? My client wants the language to be shown as English, Francais, not French. Is this possible?

So I changed the default language to French. However, when starting the application, it still starts in English

Is this on deployed app or when you run it locally from Radzen? When the application is deployed you have separate urls for each culture and it's up to you to decide which url should be opened. For example for app deployed on local IIS:

Here is how the change culture DropDown is bound - you can simply change the Text: 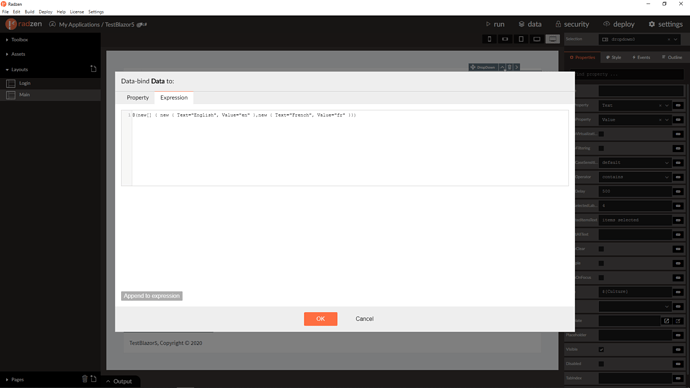