Is there any way to programmatically set the width for the dropdown part of a RadzenDropDown?

The text values within my drop down are a lot longer than the actual field itself and they end up wrapping onto another line which is a bit messy looking. It would be great if I could assign a wider area for the dropdown than the actual picker field.

I'll take the silence to mean there's no way to do this at present.

Is there somewhere to submit this as a feature request?

I was able to do this with the old Javascript framework i used to use (ExtJS) and it was such a simple yet powerful way of ensuring the UI looked clean. The way RadzenDropDown works just now you can get entries taking up multiple lines, and it'd be so much nicer if we could just specify a wider width for the dropdown part than the picker.

Response from Radzen team is guaranteed for paid customers only - check our forum FAQ for reference. You can use CSS to style every part of every Radzen component. For example: 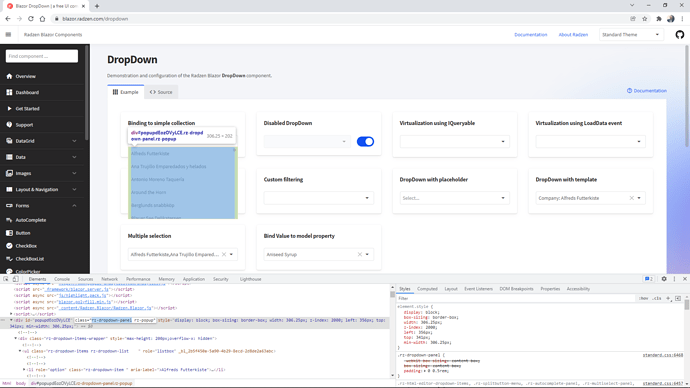 Thanks Vladimir. I'll try working with the css to do that; just thought it was a feature others might find useful, so wanted to suggest it for your roadmap.

I'm still testing Radzen, hoping to use it in a commercial product next year and then i'll get a licence. Have you considered a pricing tier for people who only use the components, and not the Radzen tool?

That said I should probably look into the Radzen tool, esp for when v3 is released, might be time i stopped doing everything by hand in VS.

Our components are free and open source, paid support is part of Radzen subscription: 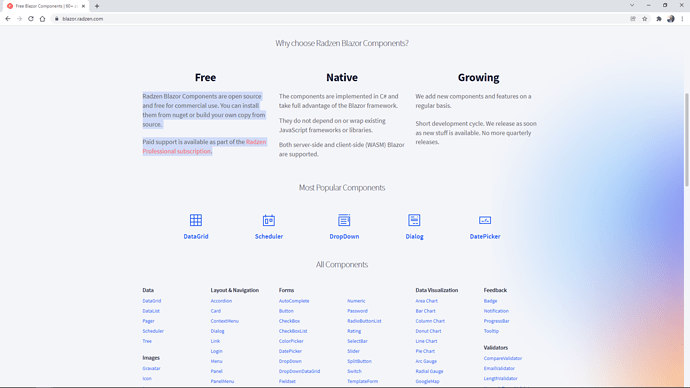